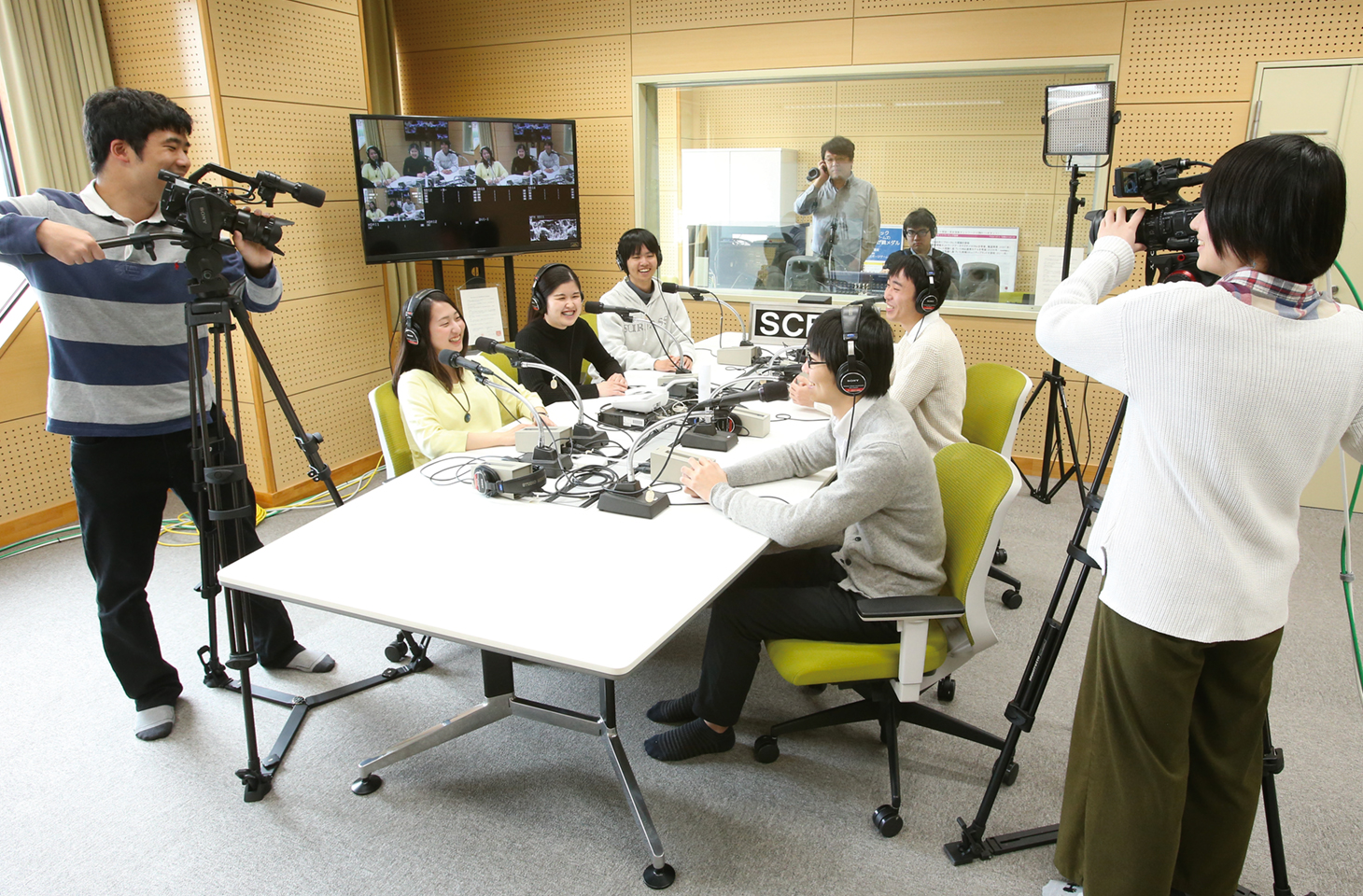 A source for transmitting information that connects the city with people and links companies with activities. Our university broadcasting station will create new possibilities.

Since the opening of its campus studio in 2014, Sojo University SCB Broadcasting Station has been attracting attention from many sectors including local administration and private companies.

SCB (Social Community Brand) Broadcasting Station is led by Professor Takashige Hoshiai of the Faculty of Computer and Information Sciences; it is equipped with all the latest equipment.

In the university class Introduction/Practice of Media Contents Creation, lectures by professionals (from TV stations and radio stations) and practice utilizing the latest devices are offered to provide the latest active learning.

In addition, by accepting actual professionals from TV stations and radio stations as partners, we hold workshops in which students undertake the entire broadcasting production ranging from planning and content creation to broadcasting.

In 2015, we also opened SCB Broadcasting Station Shinshigai Studio and our activities as a platform for regional revitalization are further expanding.

Concept Lab Inc. is a platform for regional revitalization

Concept Lab Inc. was established to become the main organization to more practically implement the method of social community brand (SCB) advocated by Professor Takashige Hoshiai of our university in the regional community. Concept Lab Inc., which promotes the activities of social community brand, supports business startups and addresses issues facing the small- to medium-sized businesses as a platform in regional revitalization by utilizing the power of the community. The location of the company is on the 2nd floor above the SCB Broadcasting Station Shinshigai Studio that opened in Shishigai in Chuo-ku, Kumamoto City in April 2015. Within the company, nine media companies collaborate and create broadcasting contents and print media in cooperation with students. In addition, Kumamoto City, Koshi City, NTT West, NEC affiliated company, Kumamoto Shinkin Bank, medical institutions, professional basketball team Kumamoto Volters, and local citizen groups are conducting regional revitalization activities.

The key phrase is “cooperation with professionals.” Content co-creation plans are being implemented one after another.

In the disaster prevention contest at the World Conference on Disaster Risk Reduction, a radio drama created by our students won a prize.